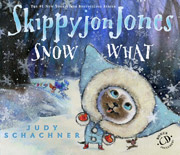 The #1 New York Times bestselling Skippyjon Jones stars in his own playful fairy tale set in a winter snowscape!

Mirror mirror on the wall, who is the bravest Chihuahua of them all? Skippyjon Jones, the Siamese cat who thinks hes a dog! While his sisters listen to Snow White and the Seven Dwarves, Skippy bounces on his big-boy bed and heads off for the REAL adventure awaiting him in his closet. Once inside, he finds himself in a magical snowy forest of make-believe, where the seven Chimichangos challenge him with his most dangerous task yet: to wake up Nieve Que, the frozen princess, by kissing her! Yuck! Will this hero agree to don a princes pantelones and save his poochitos?

With rhymes, rollicking wordplay, and mucho fairy tale fun, this fuzzy tale is sure to end happily ever after.